After watching Hercules" in theaters on July 25, Dwayne "The Rock" Johnson wants you to come away with one thing on your mind: that you've just witnessed the biggest, meanest, baddest and, more importantly, most definitive version of Hercules ever seen on the big screen.

For the majority of Hollywood's action stars, the task of realistically portraying an ancient Greek demigod would be more challenging than combining all 12 labors the mythical son of Zeus had to undertake. Many have tried in the past, and many have failed. Even for Johnson, with 260 pounds of muscle already clinging to his massive 6-foot-5 frame, it would prove no mean feat.

But after spending the majority of his life in the gym training to be a professional football player, world-renowned pro wrestler, and one of Hollywood's highest-ever grossing movie stars, it was a labor he had all the weapons to overcome.

Here, in his own words, Johnson reveals how he obtained the skin-stretching muscle he needed for his starring role as Hercules, and explains why nutrition is the most important facet of getting big. 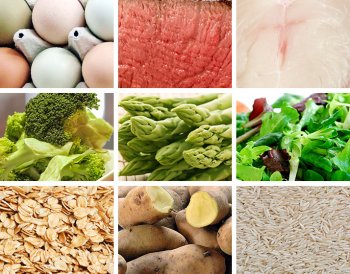 When you're an athlete-turned-actor who already has a physique idolized by millions around the world, you might think it would be easy to rest on your laurels. Not so with Dwayne Johnson. That's why he was Hollywood's highest-grossing movie star of 2013, with his four films pulling in .3 billion at the box office.

If there's one thing life has taught the former national championship-winning footballer, it's that you only get what you're willing to put in. That's why he dedicates so much of his time and energy to making sure he's at his physical peak when he steps onto the movie set.

"For different roles my condition and training and diet does alter, " Johnson states. "Depending on the role, it will really dictate the type of training I do. For 'Hercules, ' it was a 22-week diet, while for 'G.I. Joe: Retaliation' it was about a 14-week diet, and for 'Pain & Gain' I wanted to come out looking bulky, big, and dangerous, so we adjusted accordingly.

"When you're playing a character like the son of Zeus, you only get one shot."

"For 'Hercules, ' I went for the demigod look: big and mean. When you're playing a character like the son of Zeus, you only get one shot. The intensity of the training was definitely up, as was the volume of training. I really wanted to make it the definitive version of Hercules. We wanted to make it darker in tone and we based it off Steve Moore and Admira Wijaya's 'Hercules: The Thracian Wars' graphic novel, which is pretty dark."

He adds: "And then the intensity of preparation for the movies depends on the role. The training, nutrition, fight choreography, weapons training, and stunt planning are all altered accordingly. I always go in committed and try to make it the best it can be. For 'Hercules, ' I wanted to respect the mythology, or with "Fast & Furious, " I wanted to respect this massive franchise. For the G.I. Joe movies, it was similar because it's already an established brand and already an established character. You've got to look the part."

To look the part for "Hercules, " Johnson elevated his training significantly, using a six-days-on, one-day-off schedule for six months to help him bulk up. At the beginning of each morning, Johnson would complete a 50-minute cardio session before working on a specific body part depending on what day it was, with his legs being the only muscle group that received more than one workout per week.

"I start working out pretty early, around 4 a.m. When I'm filming, I do cardio and I lift before going to set. I train about six days a week, and even when I'm not filming I get up between 3 and 5 a.m. just to train. I love training when the sun is coming up because it allows me to put on my headphones and step off the crazy treadmill that is everyone's life. I have my headphones on and I'm listening to my music, and I'm 100 percent focused. There's no wasted time or effort when it comes to me and the weights.

"I work out for about 90 minutes, or maybe an hour and 45 minutes. When I hit the gym, I'm coming! I train hard, I come to kick ass—clanging and banging. With something like "Hercules, " I was in costume and make-up for a few hours before shooting, so I'd have to get in the workout early." 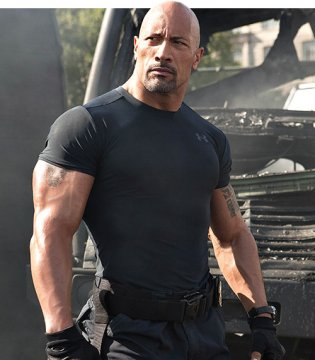 And while other actors may slack off with their training schedules once they've got a movie in the can, Johnson is among the minority of people who is in the gym all year round.

"Working out anchors my day, " he says. "For me, training is my meditation, my yoga, hiking, biking, therapy all rolled into one. I love it. Generally, I'm always shooting or preparing to shoot for something, so that's why I like keeping my conditioning in a certain zone. But even if I wasn't it would launch my day. It makes me feels good."

A Feast For the Gods

Although Johnson will be the first to tell you his vigorous training sessions have helped him get where he needs to be physically, he also follows an incredibly strict diet before and during filming.

But once again he felt he needed to up his game for "Hercules, " so Johnson and his nutrition team created his "12 Labors" diet, filled with large amounts of protein, carbs and fats, to make sure he was in the best shape of his life.

"Generally, I eat six or seven times a day, " he says. "It's about getting enough protein to aid lean muscle growth, and everything is very precisely measured depending on what targets I'm looking to hit for that day. Lots of protein, good carbs, and veggies. Nutrition is so important, it can't be stressed enough.

"For 'Hercules, ' it was a 22-week diet, full on. I'd eat a bunch of egg whites, filet mignon, chicken, fish, oatmeal, broccoli, asparagus, a baked potato, cream of rice, salad and complex carbs. All of this measured and weighed."

He adds: "It was all about hard work, discipline, and balance. I had carbs with every meal, so there was always a balance of proteins, carbohydrates, and fats. Then part of my daily regime was my glucosamine and then also a multitude of multivitamins. Then I had glutamine, branched-chain amino acids, chondroitin, and one protein shake a day, which I drank after training."

After years of playing football and being a wrestler in the WWE, Johnson has had his fair share of injuries, and now at 41 years of age it's become even more difficult to get into top-notch physical shape without his body falling apart.

"When I hit 40, I really began to start training smarter, " he states with a chuckle. "I've always tried to educate myself on my nutrition, about supplements, what I'm eating, when I'm eating, exercises, calories, and so on. Eventually I hired an awesome conditioning coach who helped me. 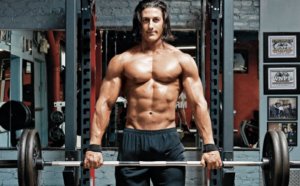 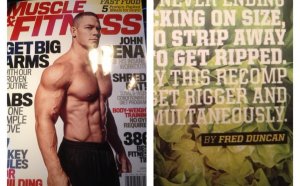 Batman and Superman are on the cover of the March issue of Muscle & Fitness magazine, and scans are online thanks…